On Friday, October 26,  the Worlds Toughest Rodeo took place at the Indiana State Fairgrounds during the National FFA Convention & Expo. At the end of the night, there was a closing ceremony to say a temporary goodbye to the Pepsi Coliseum which is going to be renovated.

The National FFA Alumni Association held a dance for all National FFA Convention & Expo attendees. The Levi Riggs Band and the Peterson Farm Brothers of Internet fame performed for the crowd, followed by DJ Doug, who played dance music for the rest of the night.

Justin Allgaier, driver of the #31 BRANDT Chevrolet Impala in the NASCAR Nationwide series, visited the National FFA Convention last week and filed this video report which is currently being featured on NASCAR.com.

How awesome is that beard net? 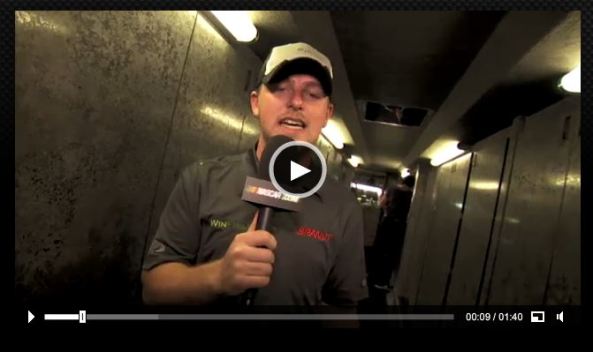 Each afternoon during the convention, Flyte, the National FFA mascot, visited the Expo floor to take pictures with fans and visit different exhibitors.

Last week, 10,000 FFA members packed 1,000,000 millions during the FFA Rally to Fight Hunger. American Family Insurance was there, and put together this great video to explain what it meant to lend a hand… 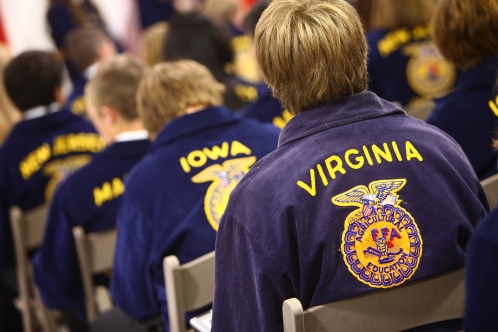 For the next year, these outstanding individuals will be the face and spirit of FFA:

Collectively, they’ll travel more than 100,000 miles throughout the country as they engage top leaders in business, government and education and lead a host of personal growth and leadership training seminars for FFA members.

The team will also help set policies that will shape the future of the National FFA Organization and promote agricultural literacy in general.

Nominees for national office must first qualify at the state level to represent their state FFA association. They must submit a detailed application that highlights their academic accomplishments and showcases contributions to their local communities. Those seeking national office must also submit an essay that explains their desire to be elected to national office. 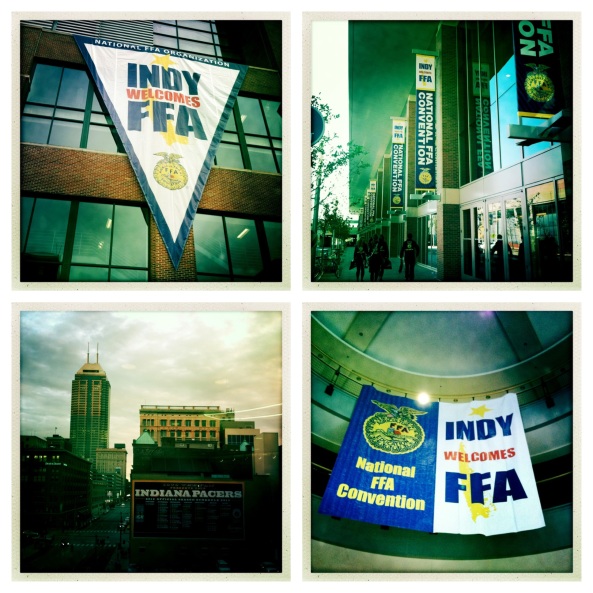 “Ain’t it funny how some things take you back?

And the here and now just fades to black

When I pull that blue tarp off of that time machine

Man it hits me” (Georgia Clay by Josh Kelley)

Seven years ago, thousands of FFA members gathered in Indianapolis for the National FFA Convention & Expo. The event had previously taken place in Louisville, Ky. However, for the last seven years, Indy has allowed us to call it home.

Countless things have changed since the city began hosting the convention and expo. Each year a few additions, updates or new structures have provided a more convenient convention and expo for the more than 55,000 visiting FFA members and guests from across the nation.

Georgia Street, renamed “FFA Way” during the convention and expo, received a new look over the years and opened up more walking room for FFA members and visitors. The RCA Dome was torn down and Lucas Oil Stadium was established. The Indiana Convention Center has grown and developed over the years to make more room for walkways and event rooms. The most recent change involved Conseco Fieldhouse, which was renamed Bankers Life Fieldhouse.

Major FFA changes have also occurred while here in Indianapolis. In 2007, membership broke the half-million mark with 500,823 members in 7,358 chapters. In 2011, we also witnessed the change of national advisors with Dr. Larry Case’s retirement and Dr. Steve Brown’s installation.

“It’s a little sad to leave Indy, just because we have all grown to know and love it. But it is always exciting to go to a new or different place,” said Ashley Sumerix, a Collegiate FFA member.

Change is necessary for an organization to continue growing and learning.

Dan May from Iowa commented, “Indy has allowed me to Grow in FFA. From high school student to college student to advisor! Great memories. Great friends. Thanks Indianapolis!”

Thank you, Indianapolis for allowing blue and gold corduroy jackets to invade your city for the last seven years. Thank you for being a friendly and gracious host. Thank you for accommodating us and being a place of adventure. But most of all, thanks for the memories.

Emily Walker is a senior at Michigan State University majoring in environmental studies and agriscience communications. This year, she’s reporting on the convention and expo as part of the National FFA Convention & Expo Newsroom Crew. 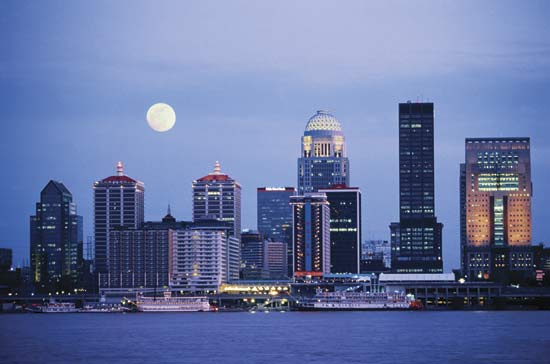 During the closing ceremonies of every Olympic Games, the host city passes on something to the next host city. At the end of the London games in August 2012, the next Olympic Games were handed over to Rio de Janeiro for 2016. The Olympic flame was extinguished, signaling the end of the games.

Although there will be no extinguished flame or an official passing-off ceremony, the National FFA Convention & Expo will be handed over from Indianapolis to Louisville, Ky., next year. The convention and expo was held in Louisville before coming to Indianapolis in 2006.

“I am excited to go to Louisville for convention next year. I like that I will have been able to attend it at both locations because it allows me to see different parts of the country,” said a Logan Denby, Ogemaw Heights FFA member. This was Denby’s first year at the convention and expo, and he was thrilled to see so many FFA members passionate about agriculture.

“I have been to both locations and they are different, but I like them both. It will be nice to be back in Louisville next year for a change of pace,” commented retired agricultural education teacher Mike Eagan.

A few graduating Colorado FFA members are hoping to attend the convention and expo in a new place to receive their American FFA Degrees.

The National FFA Organization is pleased to be back in Louisville. We are looking forward to seeing Louisville soon, and we hope to see everyone in Kentucky!

Emily Walker is a senior at Michigan State University majoring in environmental studies and agriscience communications. This year, she’s reporting on the convention and expo as part of the National FFA Convention & Expo Newsroom Crew.

“When we ran over the median, that’s when the bomb went off and everything went black.”

During the seventh general session of the 85th National FFA Convention and Expo, Josh Bleill addressed thousands of FFA members to share a story of emotion and encouragement.

Bleill was a United States Marine who had suffered an accident during his tour in Iraq. He had enlisted in the Marine Corps in 2002. His father and grandfather had served in the military before him and after 9/11, he knew it was his duty to enlist. On October 15, 2006, Bleill lost both of his legs when an IED exploded under his Humvee in Fallujah, Iraq.

Bleill went through two years of rehabilitation. “I hid from the world. I missed out on a lot of great opportunities because I was scared,” he said of his challenges during rehab.

He overcame hardships and learned to walk with two prosthetic legs. At first, he struggled through negativity and failures. But after receiving support from family, friends and neighbors, he was able to turn his situation into a positive one. He learned to appreciate every second of life and be a role model for others.

After Bleill’s heart-touching story of tragedy and triumph, his message rang out loud and clear in Banker’s Life Fieldhouse. “When you want to grow, you have to grow your vision. It’s about giving. You have to GROW your voice.”

END_OF_DOCUMENT_TOKEN_TO_BE_REPLACED

Eligible FFA members must also have met other agricultural education, scholastic and leadership requirements. A
panel of judges who ultimately name the top candidate in each area interviews each finalist. Carley’s name was
called in an on-stage ceremony and will receive an award of $4,000. Each of the three other finalists will each
receive $2,000.

Read more about the incredible accomplishments of each of this year’s Star award winners:

The American FFA Degree recognition programs, such as the American Star Awards, are co-sponsored by Alltech Inc., Case IH, Elanco, Farm Credit, Pioneer Hi-Bred, a DuPont Business, and Syngenta as a special project of the National FFA Foundation.